Alex Grimes made this 14 month voyage from his home town of Wells Next the Sea, Norfolk sailing in a 30 foot trimaran named 'Trinui'.

He set sail 21st September 1962 and arrived in Auckland, New Zealand on 14th December 1963, as quoted in the press at the time,

"... a splendid feat to sail a 30-foot trimaran 11,000 miles across the Atlantic, through Panama, across the Pacific, at one stage several weeks out of touch with the rest of the world, to Auckland in New Zealand ..."

The yacht was built in Norfolk by Contour Craft of Gorleston (subsequently Cox Marine, Ipswich) following Arthur Piver's Pi-Craft plans for the Nimble trimaran. Essentially the craft was built of plywood with an external fibreglass coating to hulls and wings.

Below is a copy of the Editorial Comment from Norfolk Eastern Daily Press 15th December 1963 announcing the arrival in New Zealand. 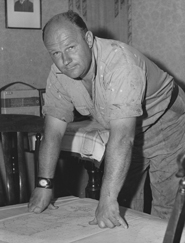 Alex at the home of his mother (21 Northfield Crescent, Wells) plotting courses to NZ. The chart is for the Canary Islands, to pick up the north east trade winds.

I think the radio in the background was a Grundig Yacht Boy shortwave set. It was the sole communication equipment taken on board, capable only of receiving transmissions.

Partly visible on the wall is a photo of his elder brother, Leslie, my father, who also became a Master Mariner in the Merchant Navy. 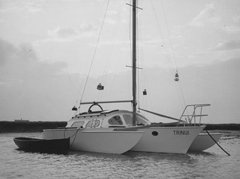 Trinui at anchor in the harbour at Wells. 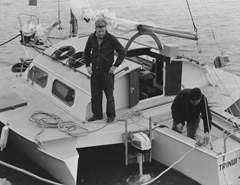 Shipmate Roy Garside and Alex checking out the outboard motor. 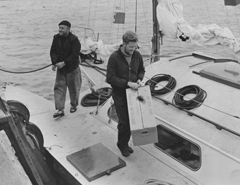 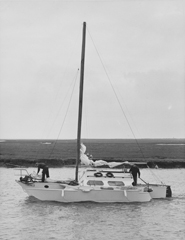 Trinui in 'The Run' out of Wells bound for New Zealand. 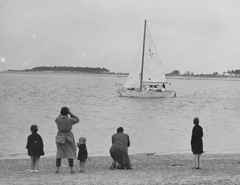 Trinui finally off under sail!

Some of our own family photos

We took these when I went with some of my family to Wells from Yorkshire in September 1962 to wish my uncle Alex a safe voyage.

The quality is not so good as they were taken with a miniature 35mm film camera. 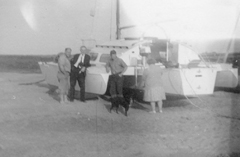 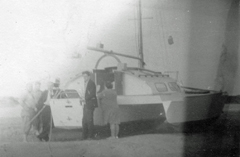 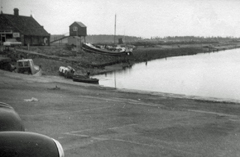 Alex and Roy launching jolly boat in Wells Harbour to take someone across to the Trinui. It wasn't me, although I did get across eventually and slept overnight on board; quite an adventure for a sixteen year old. 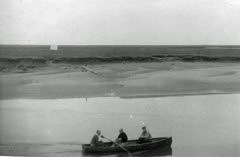 Alex rowing someone out to the Trinui. Roy is in the bow. 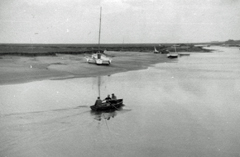 Nearly there, with the tide on it's way in. 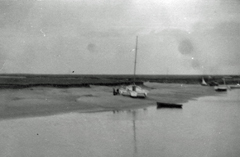 Safely ashore but with wet feet. 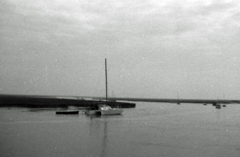 High tide; time to come back to quayside.

"He intends to sail across the Atlantic and through the Panama Canal and to call at Tahiti and the Cook Islands on his way ... Mr Grimes is the second son of Mrs and the late Mr [William] Grimes. His father was in the navy in the first world war and at one time was a member of Wells lifeboat crew. His elder brother Leslie is the master of a coastal vessel."

"He has no previous experience of sailing but he hopes to get used to it on board the new trimaran."

"While in New Zealand he has been chief officer on a coastal ship and he intends to take up a similar job when he gets back there."

"After searching for a crew and companion for a voyage to New Zealand in a trimaran, Mr Alex Grimes a 37-year-old merchant navy officer from Wells has chosen a King's Lynn seaman ... Mr Roy Garside, aged 21."

"Pulling into Pape'ete, he was most impressed by the powered bicycles that went streaming by, ridden by Tahitian girls with long hair way down past their waists and all with flowers in their hair and wearing brightly coloured sarongs."

"He described the meals on board ... I cooked rice with dehydrated peas while Roy cooked dehydrated spuds and beans called caraotas [black beans] and garbanzo [chickpeas] beans. One tastes like butter beans, the other like hazel nuts."

"Mr Grimes' mother yesterday received a cable which told her of his [Alex] safe arrival in New Zealand ... When I opened the cable and read what was on it I felt immensely relieved."

"Although I always knew he would get there I was a little worried at times as every mother would be. My only wish is that I could have been there to greet him as he came ashore."

"... after the first Piver Nimble voyage from England to New Zealand made by sailor Alex Grimes ..."

Rough chronology of the voyage

(some dates estimated by landlubber author)

If you have Google Earth installed, then email me for the .kmz file which will open in that program to show the above course of the voyage. Unfortunately, direct loading of this file is not supported in the free hosting by neocities.org, so here is a Google Map version:

and you can also click here to view in Google Maps in a new window.

And after completing the voyage ...

Trinui was sold soon after arriving in Auckland and Alex worked for several years in the New Zealand merchant navy, including being master on the ferry between North and South Islands.

Quoting from a letter received from a close friend after his death in 1998:

"Alex acquired a small house and a couple of acres in the far north of NZ, at Kohukohu, on the Hokianga Harbour. Although a somewhat isolated spot, he walked for hours with one or other of his two dogs, over the local hills."

I believe his crewmate Roy went back to Pape'ete, Tahiti and married a local girl. 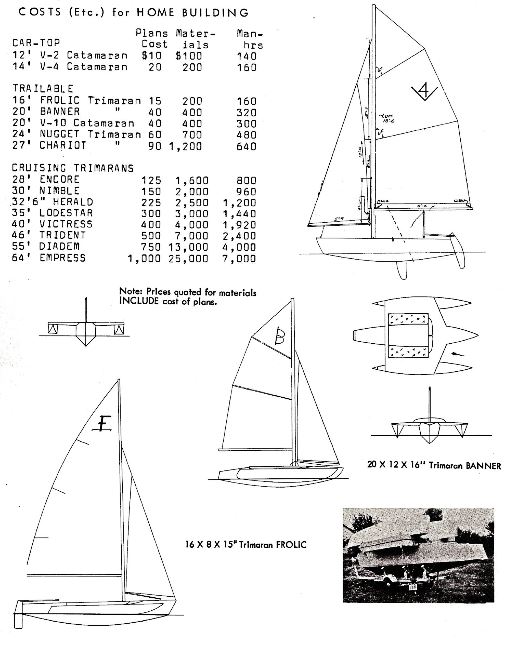 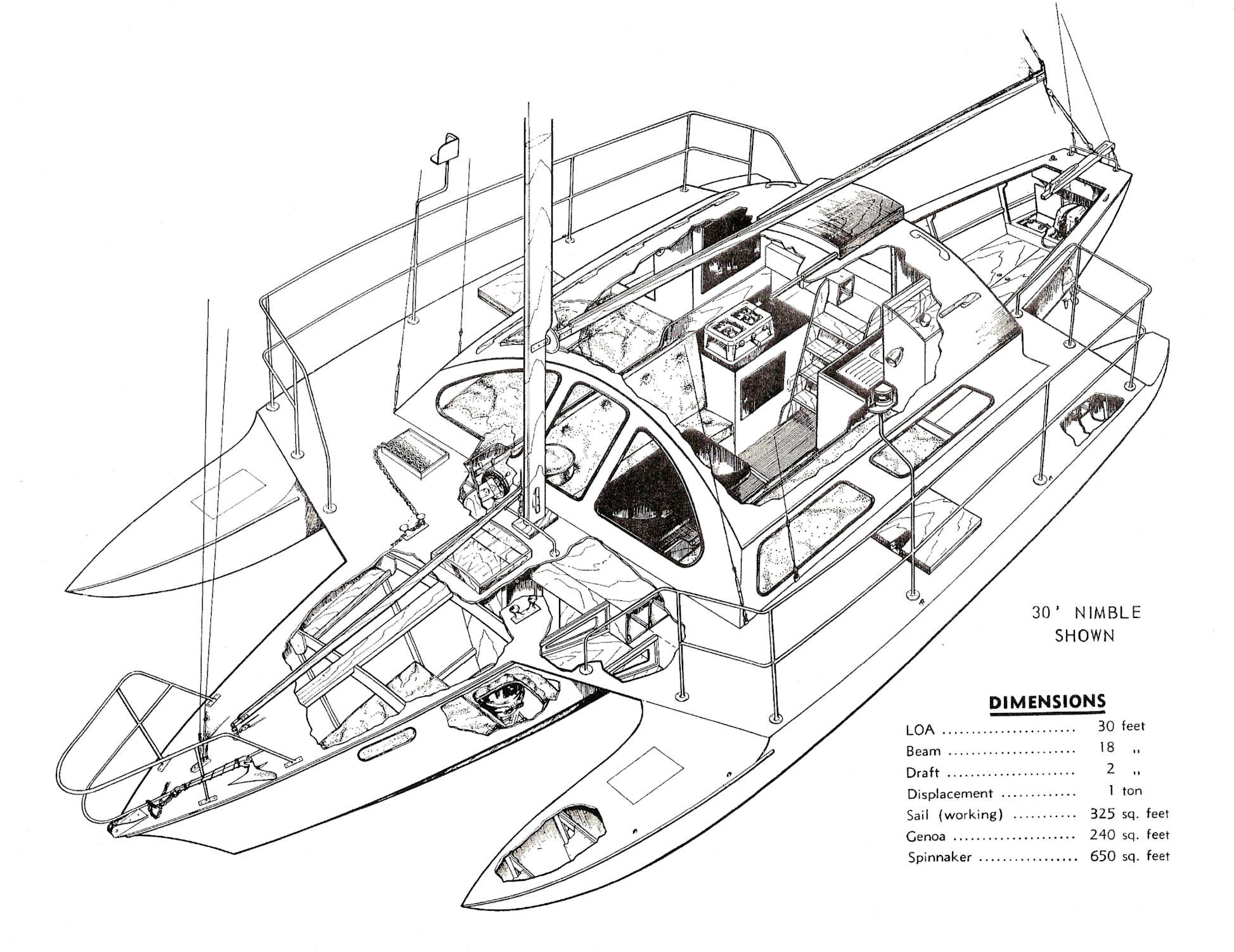 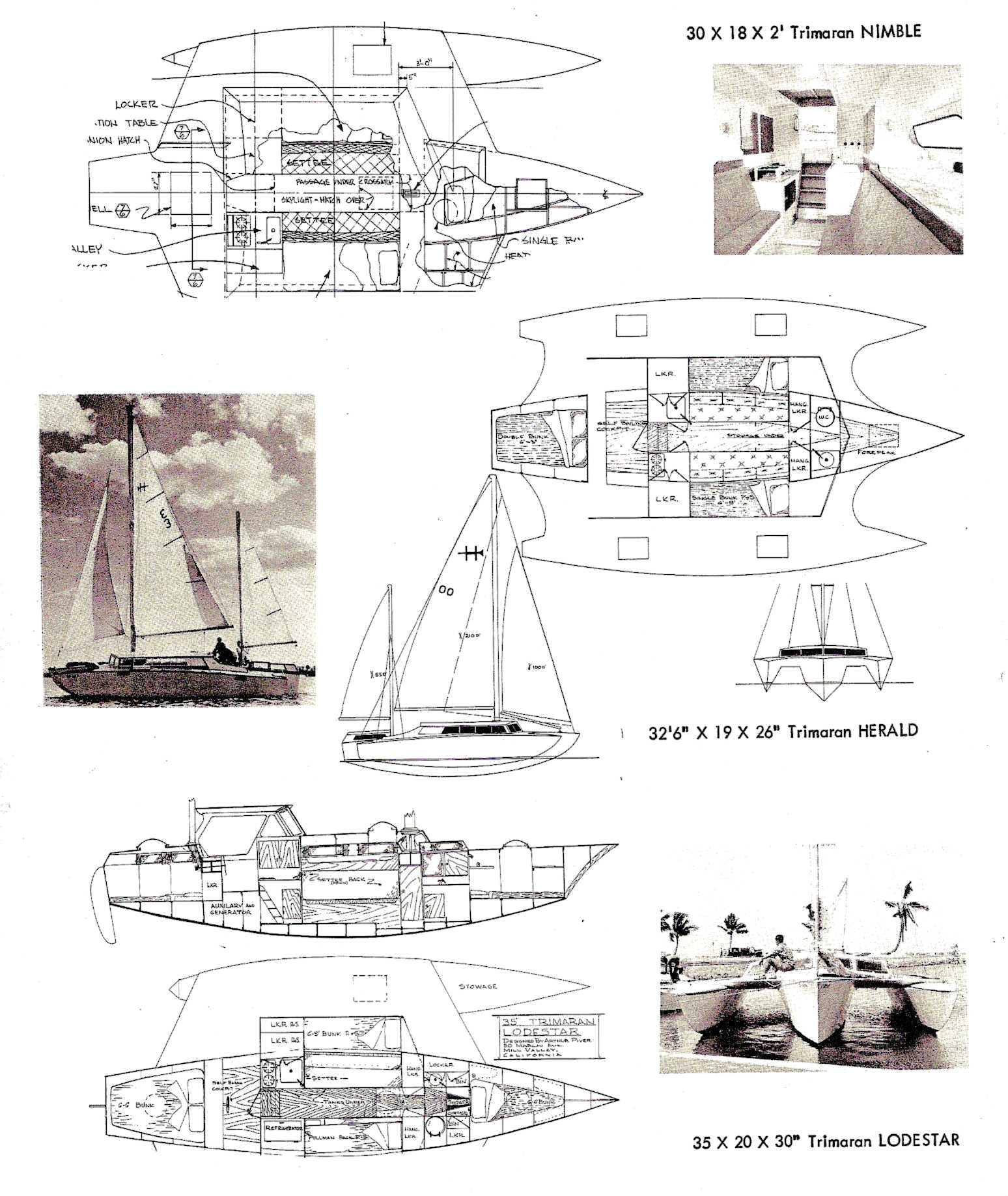 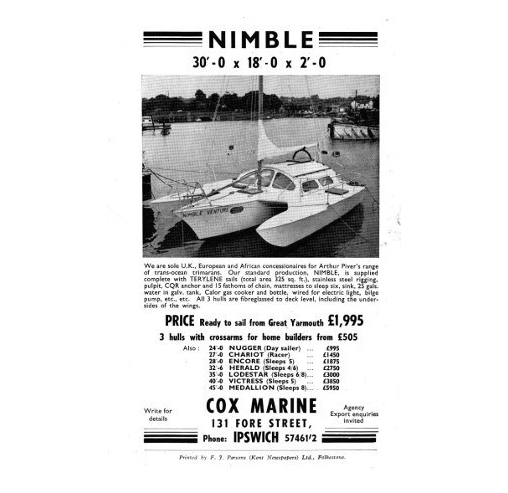 Arthur Piver owner of Pi-Craft wrote in testament of his trimaran's design,

"The supreme test occurred [in 1960], which was the crossing of the Atlantic by NIMBLE. You can sail around the harbor and along the coast for a hundred years and still not know how your boat would act in a storm far at sea.

The voyage began inauspiciously, consisting of drifting around the Nantucket Lightship for several days in dead calm and pea-soup fog. Then things began to really happen. A storm arose at night - developing into ten days of continual NW gales which thoroughly tested the trimaran and its crew.

The boat was at first run off before the tempest, with a warp dragging astern according to custom, for what had been acknowledged the most dangerous situation was to go too fast down-wind for fear of broaching (an uncontrollable turn into the wind) or running clear underwater at the bottom of a wave.

Once the trailing warp twisted upon itself, apparently reducing its drag, and as the wave steepened prior to breaking, the trimaran simply surfed ahead of it, and the wave broke well astern! This was all that was needed to know, and the warp was henceforth pulled in, and the boat surfed for hour after hour, with no water on deck except for wind-driven spray from adjacent breaking waves. Then an even more exciting discovery was made - if the waves were sufficiently large NIMBLE could surf across them like a surfboard, giving even greater speed and more choice of direction."

and of its strength,

"Despite simple, unballasted construction our trimarans are proportionately stronger than any other type. Consider the case of the one which landed on a Hawaiian reef in the late Fall of 1963. For over 20 hours it was smashed against jagged coral by large seas and received only MINOR damage. No other boat - regardless of type of construction - could have withstood such a merciless beating. Again this was a display of the reduction of impulse forces by light weight."